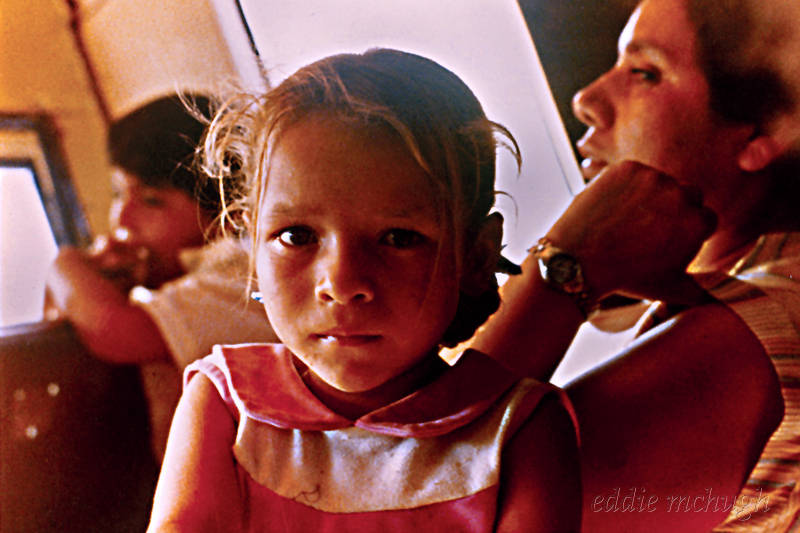 As a youth I was an intrepid traveler. Often times lighting out without a cent in my pocket. An army jacket,tennis shoes and a sleepingbag,and of course my thumb. It was not uncommon for me to ‘sing for my supper’ in a mission, a drunk on each arm. Mexico was a favorite destination for me . In   1973 I was traveling in the mountains near Tepic  on a second class bus, the only way in to Barre de Navidad (Christmas Reef) . Here I found this young lady ,fascinated with a ‘not seen often’ Gringo with a funny looking device  in his hands.  She was quite obliging of the moment,   all the while her mother keeping a close eye on the proceedings , not wanting to seem   to concerned.. This is not a sepia filtered. It is the original light inside the bus.

Before the trip I had purchased an ‘antique’ 35 mm  camera at a junk shop for 5 dollars.Probably made in the 40’s I would say. It was ‘semi-automatic’  probably  one of the earliest of its kind. I bought some film for it and took it along to record my adventure.  I really didn’t know how to use it.  In ‘automatic ‘mode you had to adjust the f-stops So I cut the flap off the film box and taped it to the back of the camera.

The flap had  a coded  diagram that inluded a sun,a cloud over the sun, a moon..etc…etc,  this is how I new how to set the exposure for the shots.

I scanned this in a professional  scanner at 400 dpi.and pp in CS3.